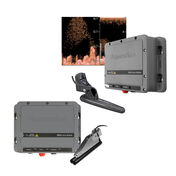 The ultra-compact CP100 CHIRP DownVision Sonar Module is compatible with all Raymarine a-Series, c-Series, e-Series, and gS-Series multifunction displays. The CP100 is available bundled with the CPT-100 transom-mount transducer.

CHIRP SideVision and DownVision Together
Combine the CP200 with CHIRP DownVision for the ultimate in sonar intelligence, and enjoy a full 180° view of your underwater surroundings. Add CHIRP DownVision to your network with a CP100 sonar or an a-Series multifunction display (DownVision models only).