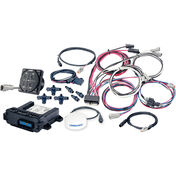 Advanced solid state electronics monitor your boat's systems and are constantly working to increase performance and economy. The system can be used in new or retrofit installations. The tabs are automatically put down before taking off to reduce bow rise and time to plane. Once the boat is on plane, it is automatically leveled and held there. It's that simple! Setup is easy, and it can use some or all of the data from other devices such as GPS speed, engine RPM, fuel consumption, etc. to constantly maintain optimal running angles every time. Two preset manual positions can be stored for such things as rough water or different speeds. A special "hold" feature maintains the boat's planing position until it's powered off. Manual override is also simple; just tap the up or down buttons. All this is controlled from a single 6" x 6" x 2" fully submersible box that contains three gyros and three accelerometers with waterproof connections and components. Plug and play illuminating key pad control with deutsch connection. Interfaces with NMEA 2000 devices to show position information on other devices or to retrieve their information. The Auto Glide system requires the installation of the NMEA 2000 GPS which is included in the kits. You may also install these kits to your existing NMEA 2000 GPS network, but it is strongly recommended to install an NMEA 2000 GPS as a backup. If your boat is equipped with Mercury's SmartCraft system, we also recommend connection with adapter cable 30246001 for additional features.
Lenco Auto Glide- A