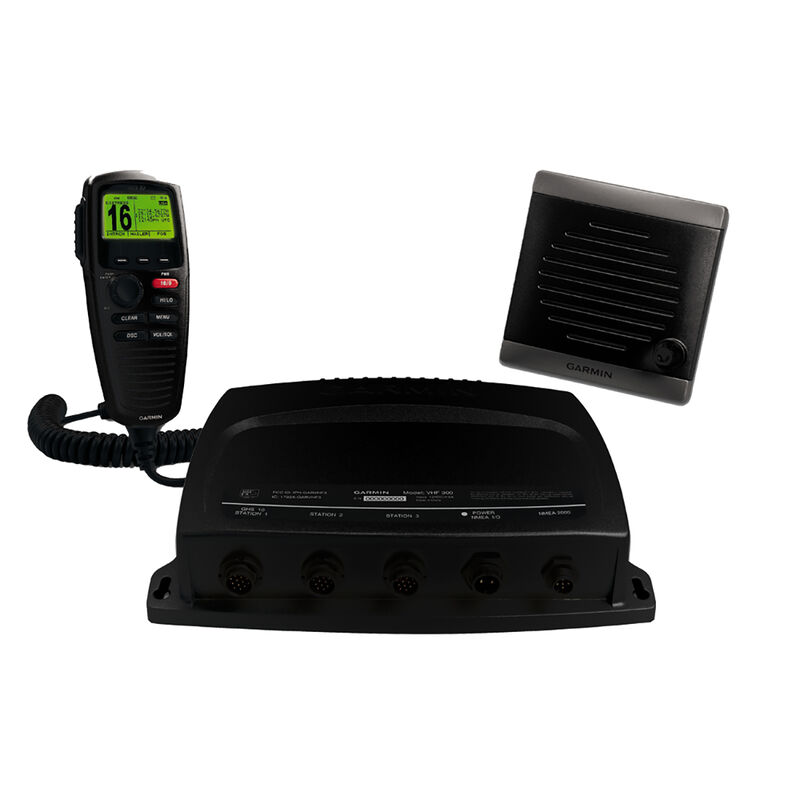 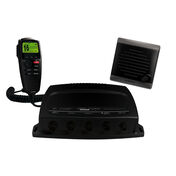 The Garmin VHF 300 marine receiver combines radio communication and 1 or 25 watts of transmit power with multi-station support to give you the flexibility and convenience you need to safely navigate and communicate on the open waters. The VHF 300 comes standard with a two-way hailer system and is also NMEA 0183 and NMEA 2000 compliant to offer greater onboard functionality. Unit dimensions: 9.75"W x 7.09"H x 2.5"D.

Communicate with Confidence
The VHF 300 is equipped with a two-way 30-watt hailer system for communication with other boats or deckhands. In addition, the VHF 300 has a voicemail feature that lets you pre-record a 15-second message and deliver the message to any Digital Selective Calling radio. You'll also have the ability to replay the last 90 seconds of any incoming voice transmission at the touch of a button.

Take Full Control
The VHF 300 is operated via the GHS 10 handset microphone that allows full radio control from a remote location. The GHS 10 features a crisp 2" LCD display, dedicated rotary key for frequent tasks, and three soft buttons for dynamic controls. Unit uses the supplied four" active speaker with volume knob, the built-in speaker on the GHS 10, or an optional third-party passive speaker.

Save Space
With a space-saving black box configuration, you'll be able to mount the VHF 300 wherever you choose. And with multi-station support, you can add the wired GHS 10 handset microphones throughout your vessel without having to add existing receivers. The system can also be used as an onboard intercom if you have multiple stations aboard your vessel.

Stay Safe on the Seas
The Garmin VHF 300 provides full NOAA weather alerts and Class D Digital Selective Calling (DSC) capability via NMEA 0183 or NMEA 2000 connectivity. Should trouble arise, DSC provides distress calls with the push of a button. And if your boat is already interfaced with a compatible GPS chartplotter, you'll get mayday signaling and a digital broadcast of your boat's position. The VHF 300 also features Position Tracking, which allows a mariner to locate and keep tabs on up to three other boats in the area.