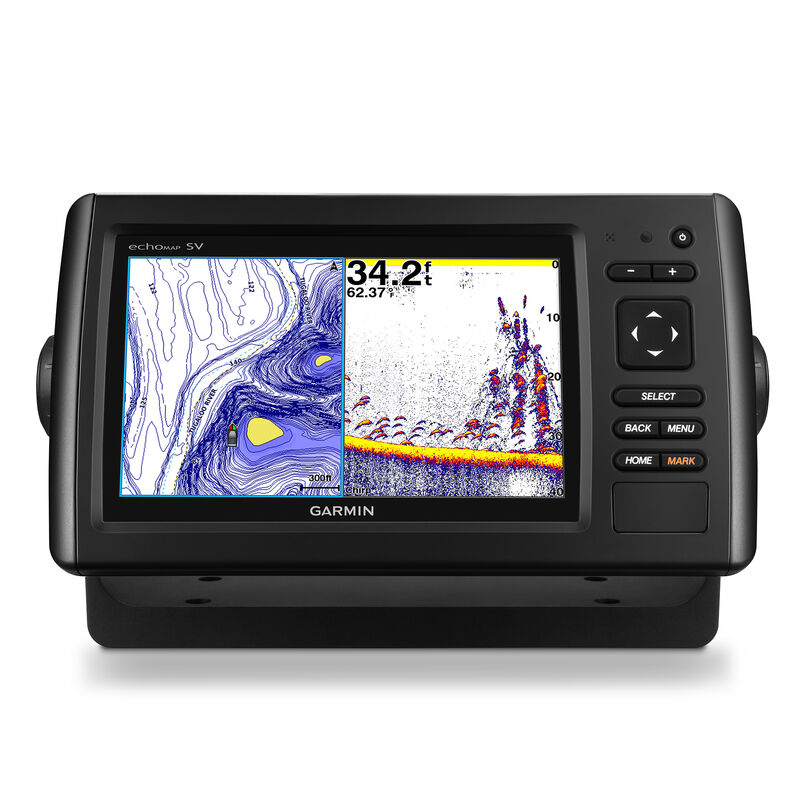 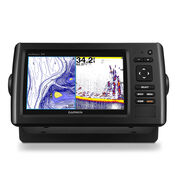 It's time you started fishing with the power of CHIRP sonar. The easy-to-install, easy-to-use 7" echoMAP 74sv includes transducer for high wide CHIRP sonar and Garmin CHIRP SideVu and Garmin CHIRP DownVu, the clearest scanning sonars on the water. It supports Panoptix sonar and includes preloaded Quickdraw Contours software to instantly create your own HD maps with 1' contours as you fish. Internal 5 Hz GPS updates position and heading 5 times per second. It provides NMEA 2000 support for engine data, sensors, autopilots, and more. Cords plug directly into the mount, allowing you to quickly install and remove your device from power and mount. Transom and trolling motor mounts included.

The Garmin CHIRP Difference
The built-in sonar capabilities of echoMAP 74sv include CHIRP sonar, the most sophisticated sonar technology available for the fishing and boating public. CHIRP sonar provides amazingly clear target separation and definition because it puts even more energy onto the target than traditional sonar. It also includes sonar-recording capability that coordinates the timing of the sonar return with your boat's position and saves digital information for playback on a computer using HomePort planning software (not included). Use the user data sharing cable to share waypoints and routes between multiple devices.

Clearest Scanning Sonar on the Water
Garmin CHIRP DownVu and CHIRP SideVu scanning sonars give you nearly photographic images of what's below and to the sides of your boat. You clearly see structure, submerged objects, and fish. Also supports Minn Kota and MotorGuide trolling motors with integrated transducers.

Preloaded BlueChart g2 Maps
echoMAP 74sv is preloaded with BlueChart g2 maps covering the coastal U.S. (East Coast, West Coast, Gulf of Mexico, U.S. and Canadian sides of the Great Lakes). It also includes all U.S. charts for the entire coastline as well as everything available on NOAA charts. In addition to the basic charts, tidal stations, currents, depth contours, IALA symbols, and included fishing charts, BlueChart g2 offers smooth transitioning between zoom levels and more seamless continuity across chart boundaries. Customize your screens with Shallow Water Shading, which allows you to contour shade for all depth contours shallower than what you determine is your safe depth. Fishing charts emphasize bathymetric contours with less visual clutter on the display. And there's also a choice of standard 2-D direct overhead or 3-D "over-the-bow" map views for easier chart reading and orientation.

Create Your Own HD Maps
Quickdraw Contours is a free, easy-to-use software feature already installed on your echoMAP CHIRP 74sv. It instantly creates your own personalized HD fishing maps on screen with 1-foot contours. Tailor the maps as needed; you own them. Keep the data for yourself or share it with Garmin or your friends. No special surveying expertise is required. You just fish while Quickdraw Contours creates maps. There's no waiting around or sending your files away like other mapping software requires; your results appear instantly.